Perfect organization does not come out of chaos, all breakthroughs in science show greater and greater organization.  At first they may seem random and chaotic, but the more we learn the more organized and perfect they become.  Unlike things created by man which upon closer inspection reveal greater imperfections, science does the opposite.

Our universe is fine-tuned for life, what some call the Goldilocks zone (not too cold, not too hot, but just right).  Life wouldn’t be possible if any one of a number of fundamental physical constants were altered, even a hair. If a proton were just one percent heavier, it would decay into a neutron, and atoms would fly apart. If the weak force were slightly stronger than it is, or weaker than it is, higher elements necessary for life would have never been created in the cores of stars. And so on.  The odds against all of these constants being precisely what they need to be are trillions to one against. 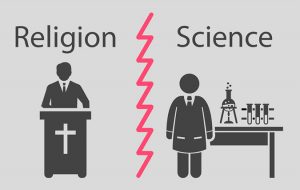 Men of Science must make great assumptions, let’s call it faith, to say there is no God.  In fact, Science has become its own faith-based religion willing to believe almost any magic act as long as it disproves God.

Beyond what has already been stated, our Sun is a relatively small star in the scheme of things, yet it is a raging fireball so massive a million Earths could fit inside.  The sun maintains a core temperature of twenty-seven million degrees Fahrenheit and is capable of burning for billions of years. How could any belief be more ridiculous and improbable than the existence of even one such inferno?

An eclipse, only possible because the moon is exactly 400 times smaller and 400 times closer than the sun to earth, is another example of an astronomical improbability with odds ranging into the trillions.  These are scientific facts for which it takes great (blind) faith to believe they came from the chaos.

Organized religion “Creationists” would have you believe that God created everything in seven days.  Some say seven, twenty-four hour days.  Some say 7000 years, quoting 2nd Peter.  Both are completely ridiculous and I won’t even bother to list the ways this has been proven wrong except to say “Fossil.”

Does this mean that there is no God or does it mean that Religion is wrong?  I won’t make you guess. Man’s interpretation of God’s Word is wrong.  Every religion out there that believes either of these two scenarios or takes God’s Word literally, is completely wrong.

The Word of God is not a historical record as many logical thinking people and historians realize, but it is the inspired Word of God.  Yes, men wrote the Bible, and as stated above things created by men are far from perfect.  The inspiration is that the men who wrote the Bible did not fully understand the meaning hidden in the parables/proverbs.  This has proven to be a powerful advantage since the men who later translated the Bible had no idea what was hidden. Though they tried with all their might, they could not corrupt what they did not comprehend.

Consider Joshua taking down Jericho with the blast of trumpets.  This is not a historical fact but a parable/proverb.  If you have seen the Proof of God presentation you realize that the story has a very deep meaning.  That meaning is God inspired and cannot be fully understood without God opening your mind to the truth of it.  Does it need to be historically accurate?  No, the parabolic meaning is its purpose.  Y’hoshua spoke not lest he spoke in parables and to take this one step further, all Scripture is written in parables/proverbs.  Why? Because Scripture is not for everyone, only for those whom God has chosen.  Matt 13:10-17

Einstein said, “science without religion is lame, religion without science is blind.” In this, he seemed to realize that organized religion is false and designed solely for the control and manipulation of the masses since organized religion has always been at odds with science, i.e. Galileo.  As it has been said, “Religion is the opiate of the masses.”  Science in all its organization and perfection comes directly from God and religion’s opposition to it is why they are the “blind leaders of the blind.” Matt 15:14

Science without God is impossible, Religion without Science is indeed blind.
Tweet