The “Valley of Achor”

“There is an accursed thing in the midst of you… You will not be able to stand against your enemies until you take away that accursed thing that is in your midst.” Joshua 7:11-13

What could He be talking about?

It says in 1Chronicles 5:1-2, the birthright of Israel, being lost by Reuben, was given to the sons of Joseph. He’s the one who had the “coat of many colors” given to him by his father, Jacob. His sons, born to him in Egypt, were Ephraim and Manasseh, the younger being Ephraim, but Jacob said the “Younger will become greater than the elder.” (Gen 48:8-22) Many people think that Ephraim is the United Kingdom of Britain and Manasseh the United States of America. They are in error. The opposite is true as Jacob crossed his hands in giving the blessing. Jacob said his name would come upon Ephraim, which is America!

With that in mind, God says in Isaiah 58, “Cry aloud, lift up your voice like a trumpet and show My people their transgression and the House of Jacob their sin…” The nation of Israel (i.e. America) has sinned against God. They have transgressed His Covenant in that they have disobeyed every single Commandment given and gone off in their own vain imagination. Why? Because those who lead them have caused them to go astray! (Jer 50:6) Therefore, the children of Israel (America) are not and will not be able to stand against their enemies, neither will God be with them until they get rid of “the accursed things” in their midst. It doesn’t matter how many weapons they have or how much money is spent on them.

It’s impossible to give an accurate number to the National Debt because it goes up so quickly, but it is more than $20 Trillion. What do they have to show for such a huge expenditure? The answer is weaponry!  The Defense Budget for the last 22 years is more than $12 Trillion, which has gone from $266 billion in 1996 rising steadily to $773 billion in 2017 and another $639 billion slated for 2018. Add it all up with the interest charged and the “debt ceiling” rising exponentially the country is slated to be in bondage to the debt incurred to the Federal Reserve System for all time.  The Senate has just raised the “debt ceiling” again just last week. Now, at the behest of the President, some members of the Senate want to eliminate it altogether! And indeed, every country on the planet is in the same situation of indebtedness.

“The rich rule over the poor, and the borrower is servant to the lender.” Prov 22:7

Prior to 1917, the United States didn’t have a debt ceiling. Then on April 6, U.S. President Woodrow Wilson declared war on Germany to enter into WWI. This threw the U.S into a spiral of debt that has only escalated from then till now due to military spending. That was one hundred years ago.

The Military Budget for the United States

This Monday, September 18, the United State Senate overwhelmingly approved the 2018 National Defense Authorization Act (NDAA), which will put an even larger sum of money into the military budget.  Passage of the NDAA approves a $700 billion defense budget making an annual increase of $80 billion.

The United States already spends more on their defense budget than China, Saudi Arabia, Russia, the United Kingdom, India, France and Japan combined. The United States and its close allies are responsible for two thirds to three quarters of the world’s military spending. 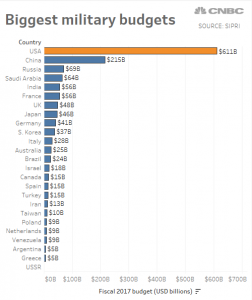 God says in Deuteronomy 17:15-16 When you set a king or ruler over you it shall be one, “whom the LORD your God shall choose: one from among your brethren: …And he shall not multiply horses to himself, nor cause the people to return to Egypt, to the end that he should multiply horses: forasmuch as the LORD has said to you, You shall henceforth return no more that way.” He’s talking about the war-like ways of Egypt and the build-up of weaponry.

The Year of Jubilee – “Forgive us our debts…”

The Year of the Jubilee involves a year of release from indebtedness and all types of bondage.  All debts are to be forgiven. Among the benefits of the Jubilee was that both the land and the people were able to rest.

In the very first chapter of Exodus we find that when Israel was in Egypt, after Joseph died, the Pharaoh put them in economic bondage building up his defenses. He put taskmasters over them and caused them to labor in his service. In the second chapter of Exodus, verse 23-25, Israel cried because of their affliction and “their cry came up to God by reason of their bondage. And God heard their groanings and He remembered His Covenant with Abraham, with Isaac and with Jacob…” In chapter three He calls to Moses and says to him, “I have surely seen the affliction of My people and have heard their cry… for I know their sorrows. I am come down to deliver them out of the hand of the Egyptians… I have also seen the oppression wherewith the Egyptians oppress them. Come now, I will send you to Pharaoh that you may bring forth My people, the children of Israel, out of Egypt.”

Moses eventually went before Pharaoh and demanded of him, “Let my people go!” And finally, after the plagues were put upon him, he did. And while Israel was in the wilderness, God delivered His Laws and statutes by way of Moses to give to Israel. Among those statutes He said:

“He that sacrifices to any god, save to the LORD only, he will be utterly destroyed. You shall neither vex a stranger nor oppress him: for you were strangers in the land of Egypt. You shall not afflict any widow, or fatherless child. If you afflict them in any way and they cry at all to Me I will surely hear their cry; And My wrath will wax hot and I will kill you with the sword; and your wives will be widows, and your children fatherless.

If you lend money to any of My people that are poor by you, you shall not be to him as an usurer, neither shall you lay upon him usury.”  Ex 22:20-25

Usury is defined as: the illegal action or practice of lending money at unreasonably high rates of interest.

Going forward to chapter 25 of Leviticus, God calls for a “year of jubilee” when the “trumpet shall sound” in the “Day of Atonement” and says, “And you shall hallow the fiftieth year, and proclaim liberty throughout the land unto all the inhabitants thereof…” verse 17, “You shall not oppress one another, but you shall reverence the LORD your God: for I am the LORD your God. Wherefore you shall do My statutes and keep My judgments and do them, and you shall dwell in the land in safety…

He goes on to say that if you will keep His Commandments and His statutes it will go well with you and you shall dwell in safety and in peace. You will chase your enemies and they will fall before you. And He will establish His Covenant with you and be your God and you shall be His people. But if you will not hearken to Him to keep His Commandments, then He will turn His face against you and cause those who hate you to rule over you and you will be slain before your enemies!

One Nation – The Valley of Dry Bones

“The LORD carried me out in the Spirit of the LORD and set me down in the middle of the valley which was full of dry bones… And He said to me, Prophesy to these bones and say to them, O you dry bones, hear the Word of the LORD, “I will cause breath to enter into you and you shall live… and you shall know that I am the LORD! …and they stood up upon their feet, an exceeding great army. Then He said to me, Son of Adam, these bones are the whole House of Israel: behold, they say, Our bones are dried, and our hope is lost: we are cut off for our parts…

This says the Lord GOD; Behold, I will take the children of Israel from among the heathen, where they are gone… And I will make them one nation in the land upon My mountain of Israel; and one king shall be king to them all: and they shall be no more two nations, neither shall they be divided into two kingdoms any more at all: Neither shall they defile themselves any more with their idols, nor with their detestable things, nor with any of their transgressions: but I will save them out of all their dwellingplaces, wherein they have sinned, and will cleanse them: so they shall be My people, and I will be their God. And My servant of David shall be king over them; and they all shall have one shepherd: they shall also walk in My judgments, and observe my statutes, and do them.

Moreover I will make a Covenant of peace with them; it shall be an everlasting Covenant with them: and I will place them, and multiply them, and will set My sanctuary in the midst of them for evermore. My tabernacle also shall be with them: yes, I will be their God, and they shall be My people. And the heathen shall know that I the LORD do sanctify Israel, when My sanctuary shall be in the midst of them for evermore.”

In Matthew 15:24 Jesus said, “I am not sent but to the lost sheep of the House of Israel.”

The Trumpet is sounding, NOW is the time for the House of Israel to come out from among the heathen and keep the Commandments of God. Jesus/Y’hoshua was that High Priest who made the Atonement Offering for his brethren, the House of Israel. He is thereby the kinsman redeemer and tribute is due him for his sacrifice. God has been waiting for this time when the House of Israel will come together and be that “One Nation under God” to serve Him and not man. What happened to Pharaoh is merely an example to those at the end who oppress His people. His wrath will be to them until they are destroyed.

The Trumpet shall sound!

“The Trumpet shall sound…” by Phil Driscoll