Home of the Brave, Land of the Free

Before America was, there was Scotland, still part of the United Kingdom of Britain, Scotland and Ireland. These are the brethren of the founding fathers of America, referred to in America’s Declaration of Independence. They claim the Apostle Andrew as their Patron Saint, as they say, he was sent to them first by Christ. Today, November 30, a feast day in his honor is celebrated in Scotland.

The nations of America, the United Kingdom and Northwestern Europe including Belgium, Holland, France, Norway, Sweden and Denmark became the wealthiest nations on earth in the very short time of the last two centuries. Since AD 1800 they have acquired more than three-fourths of all the wealth and resources of the earth.

Never before has a people been so blessed in the history of humankind to have spread out and grown so rapidly to wealth and power. These are the people to whom the legends of the Holy Grail and the Stone of Destiny (Lia Fail)  belong. Today, that Stone can be seen in Westminster Abbey beneath the Coronation Throne.

The Stone of Jacob appears in the Book of Genesis as the stone used for a pillow by Jacob, grandson of Abraham, whose name was changed to Israel. After Jacob had a vision in his sleep, he consecrated the stone to God. More recently, the stone has been claimed by Scottish folklore and British Israelism.

The feast of St. Andrew is November 30. He is the “patron saint” of Scotland. Andrew was one of Christ’s twelve apostles. Twelve were chosen because Jacob has twelve sons, and therefore twelve tribes of the House of Israel.

Jesus sent the Apostles to none other than “the Lost Sheep of the House of Israel,” (Mat 10:6) As witnesses and teachers of God’s Truth. Andrew went to Scotland among other places.

In Germany, the feast day is celebrated as Andreasnacht (“Andrew’s Night”), in Austria with the custom of Andreasgebet (“Andrew’s Prayer”), and in Poland as Andrzejki (“Andrew’s (festivities)”), in Russia as Андреева ночь (“Andrew’s night”).

The Scottish Declaration of Arbroath

The Scottish Declaration of Independence is often referred to as “Scotland’s Most Precious Possession.” Also known as the “Declaration of Arbroath´, it is a letter from King Robert (the Bruce) of Scotland to Pope John XXII, dated the 6th of April AD 1320.

Excerpts from the Declaration of Arbroath:

“…We know from the deeds of the ancients and we read from books — because among the other great nations of course, our nation of Scots has been described in many publications — that crossing from Greater Scythia, via the Tyrhennian Sea and the Pillars of Hercules, and living in Spain among the fiercest tribes for many years, it could be conquered by no one anywhere, no matter how barbarous the tribes. Afterwards, coming from there, one thousand two hundred years from the Israelite people’s crossing of the Red Sea, to its home in the west…”

“In their own kingdom, one hundred and thirteen kings have reigned of their own Blood Royal, without interruption by foreigners.
The merits and nobility of these people, even if they were not obvious from the other signs, shine out openly enough from this, that even though they lived at the furthermost ends of the Earth, the King of kings and the Lord of lords, Jesus Christ after His Passion and His Resurrection, called them nearly the first to his most Holy Faith. Nor did He want to confirm them in the said Faith by anyone but the first to be an Apostle, despite being second or third in rank, the brother of the Blessed Peter, gentle Saint Andrew, whom ever since, He has asked to protect them as their Patron.”

Then recounting the tyrannical behavior of the king of England toward them:

“From these countless evils, with His help who afterwards soothes and heals wounds, we are freed by our tireless leader, king, and master, Lord Robert, who like another Maccabaeus or Joshua, underwent toil and tiredness, hunger and danger with a light spirit in order to free the people and his inheritance from the hands of his enemies. And now, the divine Will, our just laws and customs, which we will defend to the death, the right of succession and the due consent and assent of all of us have made him our leader and our king.

As long as but a hundred of us remain alive, never will we on any conditions be brought under English rule. We do not fight for honor, riches, or glory, but solely for freedom which no true man gives up but with his life. …we commit the upholding of our cause to the Supreme King and Judge, entrusting our worries to Him and completely confident that He will fill us with courage and reduce our enemies to nothing.”

By this document, Scotland is known as, “The home of the Brave, and the Land of the Free!”

In 1776, America too wished to be independent of England. They fashioned their declaration after the Scottish declaration of their brethren.

Excerpts from the United States Declaration of Independence:

IN CONGRESS, JULY 4, 1776 – The unanimous Declaration of the thirteen United States of America

“…appealing to the Supreme Judge of the world for the rectitude of our intentions, do, in the Name, and by Authority of the good People of these Colonies, solemnly publish and declare, That these united Colonies are, and of Right ought to be Free and Independent States, that they are Absolved from all Allegiance to the British Crown…

Nor have We been wanting in attentions to our British brethren. We have warned them from time to time of attempts by their legislature to extend an unwarrantable jurisdiction over us. We have reminded them of the circumstances of our emigration and settlement here. We have appealed to their native justice and magnanimity, and we have conjured them by the ties of our common kindred to disavow these usurpations, which would inevitably interrupt our connections and correspondence. They too have been deaf to the voice of justice and of consanguinity . We must, therefore, acquiesce in the necessity, which denounces our Separation, and hold them, as we hold the rest of mankind, Enemies in War, in Peace Friends.

…And for the support of this Declaration, with a firm reliance on the protection of Divine Providence, we mutually pledge to each other our Lives, our Fortunes, and our sacred Honor.

“Saint Andrew’s Cross” is the national flag of Scotland. It is incorporated into the flag of Great Britain. According to legend, The Apostle Andrew was crucified on a cross shaped as an X. It is said that it was at his own request, as he thought himself unworthy to be crucified on the same type of cross as Jesus had been.

The Colonial Confederate flag also has the Cross of Andrew with thirteen stars representing the 13 original American colonies. Many churches, streets and ways are named for St. Andrew in America. “Home of the Brave and Land of the Free”

In Numbers, Balaam said to King Balak who wanted him to curse Israel,

“God brought them out of Egypt; he has as it were the strength of an unicorn. …according to this time it shall be said of Jacob and of Israel, What has God done? Behold! The people shall rise up as a great lion…” Numbers 23:22-24

Since the Assyrian captivity in 722 BC, Israel has been scattered to the west and to the “furthermost ends of the Earth” from which they are called and will be gathered back together. The time has come. 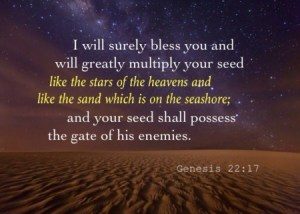