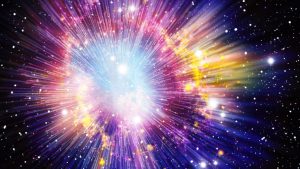 The scientific community was once divided between supporters of two different theories, the Big Bang and the Steady State theory.  A wide range of empirical evidence has strongly favored the Big Bang which is now universally accepted.  In 1929, Edwin Hubble concluded, based on observational evidence, that galaxies are drifting apart.  In 1964, Arno Penzias and Robert Wilson discovered background radiation that confirmed Hubble’s observations.  More recently, measurements of the redshifts of supernovae indicate that not only is the universe expanding, it is accelerating.

The known physical laws of nature can be used to calculate the characteristics of the universe in detail back in time to an initial state of extreme density and temperature.  According to these measurements, the universe is estimated to be about 13.7 billion years old.  Scientists refer to the exact moment the Big Bang began as the Singularity or t=0 (“t” standing for “time”).  The problem is that here at t=0 the math stops working.

“The Big Bang singularity is the most serious problem of general relativity because the laws of physics appear to break down there,” observed physicist Ahmed Farag Ali in 2015

The framework of the Big Bang model relies on Einstein’s Theory of General Relativity, published in 1916, which first suggested that the universe is expanding.  This was very controversial at the time and even Einstein was unsettled by the implications, so he added a “cosmological constant” to make his equations support a static universe.  What unsettled Einstein was that an expanding universe, implies that everything had a beginning and therefore matter and energy were created.  A static universe implies that everything that exists has always existed and will always exist.  This static and therefore eternal universe fits nicely with the known laws of physics while an expanding universe violates them.  Specifically, the law of conservation of energy and mass which state that they can neither be created nor destroyed.

After Hubble’s 1929 discovery, Einstein had to abandon the cosmological constant and accept that the universe is expanding and therefore had a beginning.  Cosmologists now largely agree that all matter, energy, space, and time itself began with the Big Bang.  This would also mean that the laws of physics began here, which is why the math doesn’t work at t=0… at t=0 the laws of physics did not exist.  At t=0, nothing became something, matter and energy were created, and the laws of physics came into existence.  This is the very definition of creation.

Everything that begins to exist has a cause outside of itself so if current scientific opinion is correct and everything began with the Big Bang, then all matter, energy, space, and time had a beginning and could not have been a natural occurrence.  Since all of nature is composed of matter, energy, space, and time, then this cause is by definition supernatural (that is, outside of nature), eternal (not limited by time), and omnipotent (as powerful as the force expanding the universe)… In short, GOD.

The religious belief that the universe and life originated ‘from specific acts of divine creation’, as opposed to the scientific conclusion that they came about through the known natural laws of physics. Creationism covers a spectrum of views, but the term is most commonly used for literal creationists who reject various aspects of science.

With that said, God did not create all that is in six 24 hour days or six 1000 year days, that is patently ridiculous.  First, there were no days or years before the creation of the Sun, which leaves the first three days in Genesis without a means to measure.   Second, fossils exist which can be dated far beyond six or ten thousand years and God did not fake them to fool us.  Third, and most importantly, it serves no purpose for the Creator of all that is to violate the laws of physics which He created.

Science believes in the principal of ignorance, yes, that is what they call it, which is as follows, in the words of Stephen Hawking:

“A singularity is a place where the classical concepts of space and time break down as do all the known laws of physics because they are all formulated on a classical space-time background. … this breakdown is not merely a result of our ignorance of the correct theory but that it represents a fundamental limitation to our ability to predict the future…”

This is a belief since, as stated, they are ignorant of any proof and a religion since they have blind faith in it.  Basically, they have no idea how the universe began, but they are certain that it was not God.

Realism as defined below seems to be the best title for this section:

Eph 6:10-17 describes the Whole Armor of God which will allow us to stand against the wiles (methods) of the devil (false teachers).  We are to arm ourselves first with the truth/reality.  These false teachers are described as rulers of darkness.  These rulers or leaders which lead the people of God away from Him are both secular and religious.  The darkness is the absence of light which God created on the 1st day, not the Sun created on the 4th day.

The First sentence in the Bible “In the beginning God created the heavens and the earth…” does not identify when, just that in the beginning God created them.  At science’s current best estimate that was 13.7 billion years ago.  That number does not in the least interfere with God’s Word or message because the Bible is not literal history.  The purpose of the Bible is not to teach us history, science, gardening or viticulture.  Nor is it to teach morals for that matter.  Sane humans don’t need God to know that murder is wrong.  All of Scripture is a metaphor with the purpose of teaching us how to interact with our Creator.

From the first moment of creation (t=0) the physical laws of nature came into existence.  From that moment all things in the natural universe MUST follow those laws.  Anyone that purports otherwise is a blind leader of the blind.  Statues don’t cry, crackers and grape juice cannot be changed into flesh and blood, men don’t walk on water, faith does not move literal mountains, and water does not come from rocks.

It is true that God is not subject to the laws of physics, as the Creator is not subject to the creation.  However, what sense would it make for Him to violate His own laws.  He gave His creation the ability to contemplate its own existence and the natural laws make that possible.  He does not expect His creation to have blind faith in something that does not make sense.

All of this does not make the creation less miraculous.  On the contrary, the Miracle of all miracles is the creation itself.