On Thanksgiving Day every year, the President makes a Thanksgiving Proclamation to look back at the year and give Thanks to God.  Trump kept with this tradition, but is Thanksgiving and the things Trump spoke of in-line with God?

The following is an excerpt from the Thanksgiving Day Proclamation by Trump on November 23, 2017:

On Thanksgiving Day… Americans give thanks to Almighty God for our abundant blessings.

…In the aftermath of the Battle of Gettysburg, one of the bloodiest battles of our Nation’s Civil War, President Abraham Lincoln proclaimed that the country would set aside one day to remember its many blessings. “In the midst of a civil war of unequaled magnitude and severity,”

Today, we continue to celebrate Thanksgiving… In the aftermath of a succession of tragedies that have stunned and shocked our Nation — Hurricanes Harvey, Irma, and Maria; the wildfires that ravaged the West; and, the horrific acts of violence and terror in Las Vegas, New York City, and Sutherland Springs —… In the midst of heartache and turmoil … As we mourn these painful events, … we seek God’s protection, guidance, and wisdom … I encourage all Americans to gather, in homes and places of worship, to offer a prayer of thanks to God for our many blessings.

“Hear the Word of the LORD, you rulers of Sodom; give ear to the Law of our God, you people of Gomorrah… When you come to appear before Me, who has required this at your hand to tread My courts?”

“Your appointed feasts My Soul hates: they are an abomination to Me; … And when you spread your hands forth, I will hide My eyes from you: yes, when you make many prayers, I will not hear: your hands are full of blood.”

“Ah sinful nation… they have forsaken the LORD, they have provoked the Holy One of Israel to anger, they have gone away backward. … your cities are burned with fire: strangers devour your land in your presence, and it is desolate, as being overthrown by strangers…” ISAIAH

“I will turn your feasts into mourning, and all your songs into lamentation; … I will make it as the mourning of an only son, and the end thereof as a bitter day.” AMOS

The End is in the Beginning

In the days of Noah, God destroyed the people on the earth for their violent ways.

“The end of all flesh is come before me; for the earth is filled with violence through them; and, behold, I will destroy them with the earth.” Genesis 6:13

In the days of Egypt – Pharaoh held the people of God in bondage, working to fortify his military machine against a fictitious enemy, as it is today. 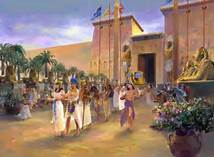 In the days of Egypt there were parades, music, games, sports and a great feast where everyone gorged themselves and made merry thanking the gods of nature for prosperous and bountiful harvests and victory in war. The Pharaoh participated in the festivities as the Grand Marshall of the parade.  Today’s Thanksgiving traditions and Proclamation follow right in-line with the traditions in Egypt from long ago.

None of this has anything to do with the Almighty God of Israel. It does nothing but stoke up His anger.  Violence and false feast days angered God in the days of Noah, just as it angers Him today.

IT’S TIME TO STOP PARTICIPATING IN THIS MADNESS!

Don’t Give Thanks, Seek God

Why God and Thanksgiving Don’t Mix

Will God hear your Prayers?

The Power of Example

Vision – as it was in the Beginning