Jesus is not God.  Jesus, more accurately known as Y’hoshua, is a son or child of God, one of many.  Most “Christian” religions teach that Jesus and God are one and the same.  Jesus himself said otherwise.  Where?

Jesus is clearly making a differentiation between himself and God.  Just prior to his death, he spoke to God and said:

“O my Father, if it is possible, let this cup pass from me: nevertheless not as I will, but as You will.”  Matthew 26:39

Jesus clarified the use of the word ‘Father’ in the context of religious leaders.  In Matthew 23 Jesus lists the hypocrisies of the Pharisees which still apply today.  These hypocrisies clearly identify religious leaders that don’t understand or correctly represent God’s Word.  Jesus said:

“And call no man your father upon the earth: for one is your Father, which is in heaven.”  Matthew 23:9

Jesus is not talking about your biological father, but a heavenly Father, the creator of all things.  At the time of Jesus, just like in today’s time, there were people who were called “father” as a way of elevating themselves into the position of religious authority, a speaker for God.  This was their doing and not something commisioned by God.

Jesus was not called ‘Father Jesus’.  The Apostles were not called by this title either.  John was not referred to as ‘Father John’, yet there were people then, as there are now that use this title.  Those are the people Jesus was talking about and calling out for misuse of that title.  It belongs to only one, God.

Father and Son as One

Those who perpetrate the idea that Jesus is God, site the following verses:

Whosoever denies the Son, the same has not the Father: (but) he that acknowledges the Son has the Father also.  1 John 2:23

When someone has the same understanding as another, they are “in lock-step” together, they think the same and could be considered of like-mind, as one.  It doesn’t mean they are the same person!  When two people get married, they are joined “as one”.  Again, they don’t merge into each other and become one entity, they are still two individuals.  Same applies.  Jesus was a son of God, not God.  A son and father are two different entities.  In order to teach God’s Word Jesus needed to understand it.  He was “as one” with God, of the same understanding.  That doesn’t make him God. 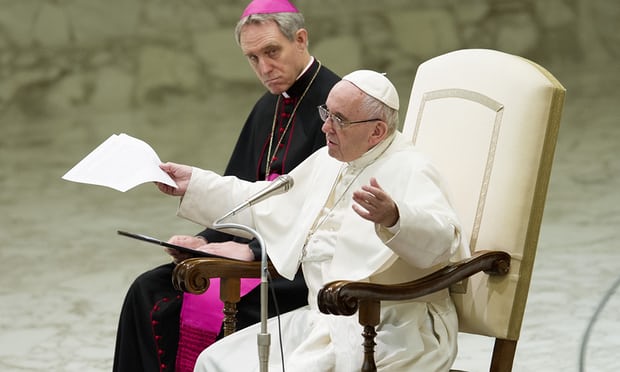 Those that elevate themselves and take on the title of “father”, on the other hand, are putting themselves in the place of God.  These ‘fathers’ are the ones Jesus was warning about, that were and still are leading people away from God, not to Him.

“Let no man deceive you by any means: for that day shall not come, except there comes a falling away first, and that man/men of sin be revealed, the sons of perdition; Who opposes and exalts himself/themselves above all that is called/spoken by God… so that he sits in the temple of God as Him, shewing/declaring himself that he is God.” 2Thessalonians 2:3-4

There is only one Heavenly Father, God, and Jesus was one of His sons.  There are other sons or children of God, but the ones taking on the title of “Holy Father” are NOT them.  Let no man deceive you!
Tweet