The words devil, satan, and demons are found throughout God’s Word.  All these names conjure up vivid images of a red creature with horns and a tail.  However, the translation of these words will paint a much clearer picture of the entities addressed.

Who is the Devil?

The word “devil”, used in the New Testament, comes from the Greek word diabolos which means “a false accuser or slanderer.”  According to Wikipedia, “Satan, also known as the Devil, is an entity in the Abrahamic religions that seduces humans into sin or falsehood.”  The definition of the word “satan” in Hebrew simply means, “an opponent; …the arch-enemy of good: adversary.”  More specifically, one who is an enemy of God.

“…And the great dragon was cast out, that old serpent, called the devil, and Satan, which deceives the whole world: he was cast out into the earth, and his angels were cast out with him.” Revelation 21:9

The Adversary of God

Who is this entity that is an adversary of God and deceives the whole world?  The name Lucifer is often associated with the idea of Satan.  Christian dogma teaches a fallen angel named Lucifer was cast out of heaven because he exalted himself above God.  That story comes from Isaiah chapter 14.  It states that Lucifer said in his heart:

“I will exalt my throne above the Stars of God…I will be like the most High.” Isaiah 14:13

The word used for “Lucifer” in Hebrew means “to boast” or “one who boasts of himself”.  Now let us reason together…  Who has seated himself in the place of God on Earth? 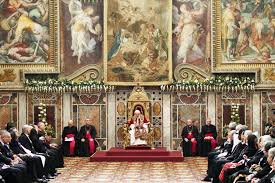 The popes throughout history have assumed such titles as:

Divine Majesty; Husband of the Church; Prince of the Apostles; Key of the whole Universe; the Pastor and Physician possessed of all Power both in Heaven and Earth. Leo X in 1513

Master of the World; the Universal Father; Viceregent of the Most High. Subsequent to Paul V

– The Dictionary of Phrase & Fable by Brewer, Classic Edition

With over 1.3 billion followers, the Roman Catholic Church has certainly deceived the majority and has exalted its throne to have power over the world. The Roman Pontiff is in the process of organizing the world religions into a One World Religious system with him at the head. 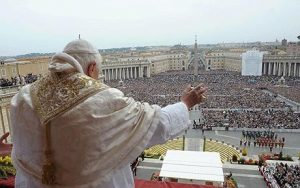 Regarding the signs of the end, Y’hoshua said, “Take heed that no man deceive you.  For many shall come in my name saying I am Christ; and shall deceive many/the majority.”  Matthew 24:4-5

The majority of the world has been deceived.  How?  An unrighteous organization has taught false doctrines that contradict God.  In dioceses around the globe, at churches on every corner, each Sunday people willingly participate in an organization known to commit rampant pedophilia (not to mention genocide and financial fraud).  Bishops covertly shuffle pedophile priests from parish to parish and country to country.  Therefore, putting additional children at risk.  Time and time again, Catholic-run institutions worldwide have been uncovered as breeding grounds for spiritual, emotional, and physical abuse.  Yet, people continue to pay tribute to them.

“And they served their idols: which were a snare unto them.  Yea, they sacrificed their sons and their daughters unto devils/daemons.” Psalms 106:36-17

Ministers of the Devil 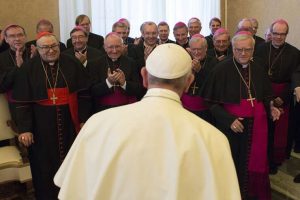 Another word associated with this notion is demons.  The word “daemons” in Hebrew can mean an inferior deity, more correctly translated as “one of lesser understanding.”   It also means an evil spirit, or “one who speaks wrongly of God and His Word.”  The word demons, used throughout the Bible, refers to the messengers or ministers of the “devil”.  The devil, called Satan, is the exalted one who has placed himself as God on Earth.  His ministers are those who do his bidding.  Bishops and priests are under the authority of the pope, leading the people into sin and falsehood.

“For such are false apostles, deceitful works, transforming themselves into the apostles of Christ.  And no marvel; for Satan himself is transformed into an angel of light.  Therefore, it is no great thing if his ministers also be transformed as the ministers of righteousness; whose end shall be according to their works.” 2 Corinthians 11:13-15 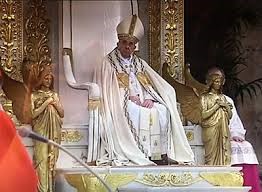 Why does an organization that systematically abuses children on a global scale also have a hold on the entire world?  The people have been deceived into thinking that their priests are ministers of God.  They could not be more wrong.  They make themselves appear to be righteous while committing the most heinous crimes.  Scandal after scandal, the Vatican tries to smooth over the public to hide its wickedness.   However, their true nature has been revealed, and they are cast down.

“For you have said in your heart, I will ascend into Heaven, I will exalt my throne above the Stars of God…I will be like the Most High.  Yet you shall be brought down to hell, to the sides of the pit.  They that see you shall narrowly look upon you, and consider you, saying, Is this the man that made the earth to tremble…?  Isaiah 14:13-16